First things first. I am SO excited to be able to do this review. But let's back up a little bit.. on Facebook Stephen's Hot Cocoa was doing a giveaway to win a can of their new Organic flavor. So I decided I would try my luck and enter. What they said was, "Raise your hand if you'd like to win a can of our new Organic flavor!" So I decided to get creative with my reply and I also just really wanted to win! 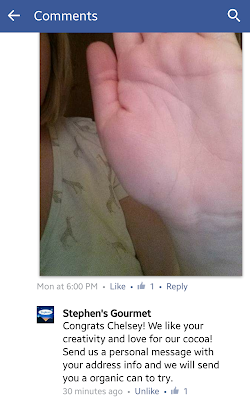 YAY! I won!! I was so excited once they wrote me and told my I had won. I felt like the luckiest person alive. I love hot chocolate especially Stephen's. You can't see what I said but I said, "My hand is raised!" And of course posted a picture of my hand raised. Surprisingly I was the ONLY one who actually took a picture. What can I say, I'm pretty darn cleaver. ha ha. 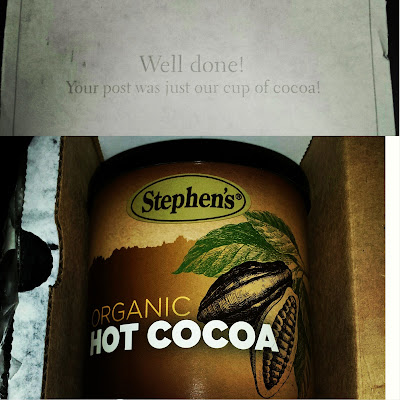 And last week on Wednesday the awaited package finally arrived! I was so excited to receive it. They even put in a cute little note. I opened it up as soon as I brought the package inside to see what it smelt like. Not bad at all, it smelt just like their normal hot chocolate. So I figured that was a good start. 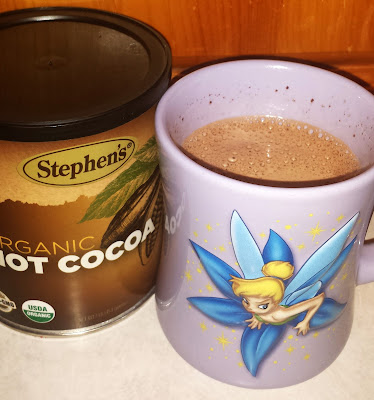 I waited a few days to try it because it was so warm outside so when there was a cooler morning you bet I popped the can back open and made me a nice cup of hot cocoa. At first I wasn't so sure what I thought about it. It had a different taste. It was a lot stronger than normal hot chocolate. But after taking a few sips I decided that it actually isn't that bad. I even had another cup the next day but this time I added some vanilla coffee creamer to it and oh boy! That made it taste just delightful. But I love vanilla everything. Anyways, I recommend this hot chocolate. Especially if you're into all the organic stuff. You can buy it on their website for $8.99 here. Also, it will be in stores soon if not yet. So keep and eye out! I say it is at least worth the try.

I want to just say thanks so much to Stephen's Gourmet for the giveaway and especially for picking me to be a winner! I'm so glad that I was able to win and to review this awesome product.
Email ThisBlogThis!Share to TwitterShare to FacebookShare to Pinterest