Back in June The Mr. & I decided that we would take a small trip down to Utah to go to the Warriors Over Wasatch (W.O.W) Air Show! It worked out because I knew my sister and her family ALWAYS go. So I gave her a call to see which day she was going so we could meet them and hang out! It was such a blast and I am so glad we decided to go. But enough of this blabbing lets get to the good stuff (the pictures..) and let them (& me..) do the talking! 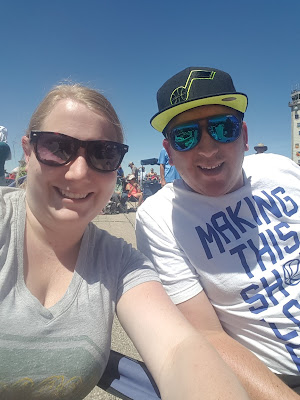 The morning of we got up super early so we could be inside the gates by 9:00 AM. We were very successful! It was already sunny, hot and gross out.. but we dealt with it ha ha! Oh and we also packed A LOT of sunscreen. Neither one of us really got too burnt thankfully! But at the end of the day we were able to tell where we had missed a spot ha ha! 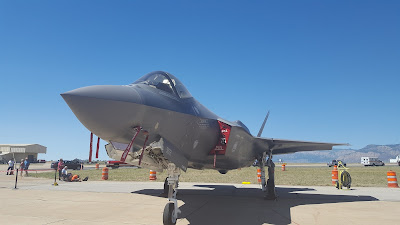 At the end of the day before the final show The Thunderbirds James and I decided to walk around and look at some more of the planes they had. The one pictured above is one of the newest ones that they have. It is super quiet when it flies and it flies fast! It was pretty darn neat. I is HUGE this picture does not do it justice. It was a beautiful plane ha ha. 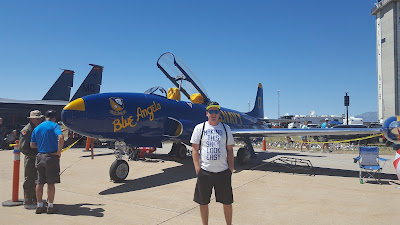 The Mr. was super excited when one of the Blue Angels planes was there. He loves them and their airshow and is already looking forward to next year when they are in Idaho Falls! Yes, we will be attending ha! So of course I snapped his picture by it so he could remember that moment and I could remember his cute little kiddo excitement! Sure do love him. 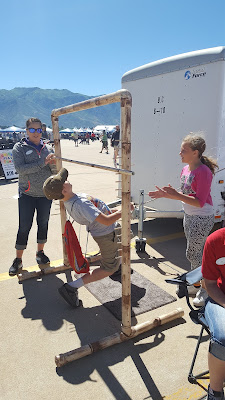 After watching of few of the airshows My sister, her chitlins and I decided to go and explore some of the booths that were around! We found and awesome one for Boondocks where the kidlets were able to play a few different games to win an awesome prize. Seth and Chloe decided to go ahead and do the limbo! Man can Chloe bend in half.. she did amazing! Seth also did pretty darn good. Seth ended up winning a plane that he could build and Chloe won a YoYo. Nico did this marble game and also won a YoYo! Good prizes all around. They had all sorts of different booths that were so much fun. They even had three different photobooths where we got lots of free pictures. My favorite one was the Wells Fargo one! 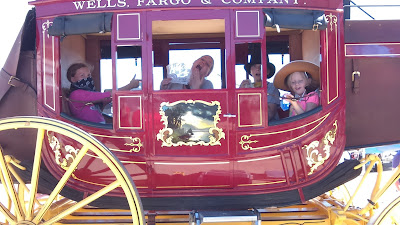 I mean look how fun! They had the stage coach and all these fun props! It was cute and fun to be able to pose with all the littles that I love oh so much!! This picture will be printed off and hung in my house because I LOOOOVVVEEE it! It shows our personalities and how much fun we have together. I love my nephew and nieces they are a ball and a hoot n' a half! 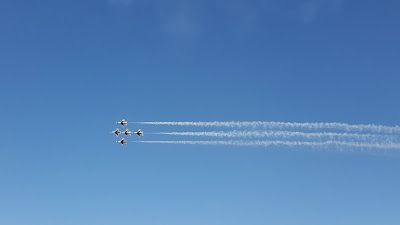 Since I only brought my phone my pictures aren't my best. I believe these were the fun French jet flyers! If not.. it was The Thunderbirds ha ha. The French Jet Flyers were my FAVORITE! They were so fun and did an amazing job. They did the coolest tricks and everything. The Thunderbirds were also pretty darn sweet! 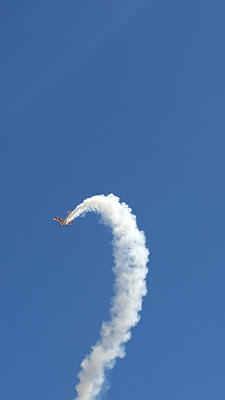 This plane was so so cool! In the sun it changed colors. Red, yellow, purple etc. It was pretty neato! They did flips and loops and tricks. It was amazing. These people are freaking talented! I couldn't even imagine doing half the stuff they do. 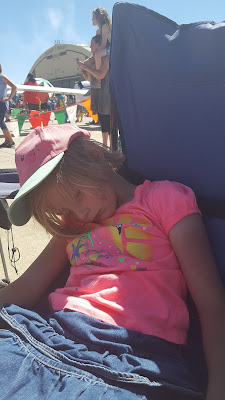 By the end of the day I think we all felt like Miss Nico! TIRED, TIRED, TIRED! It was such a fun day and I am so glad we were able to spend it together with family! Have any of you gone to the Thunderbirds shows or any air show? What did you think? Leave a comment below!