On Wednesday night James and I and the grandparents got together to carve some pumpkins! We didn't really have a theme other than what we like. So we looked online and found some patterns and went away to carving. 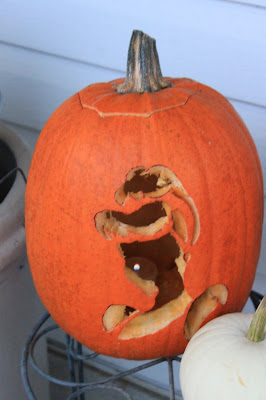 The pattern I chose was Cinderella. I love her she is my favorite Disney Princess! I thought that this pattern was going to be easy.. but boy was I wrong! I was the last one to finish carving, due to all the fine pieces I had to carve out ha ha. The joke was on me for thinking I had picked easy. Oh well I thought she turned out to be pretty darn cute! 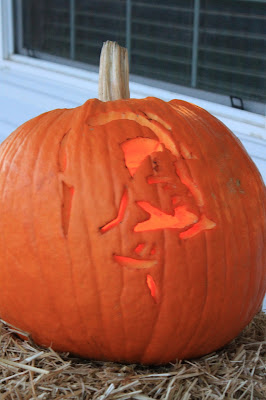 Mr James of course went with the classic Star Wars theme. He did Darth Vader who actually turned out to be pretty awesome. Especially at night all lit up. He did such a good job carving. James was the first one to be finished carving. Well done honey! 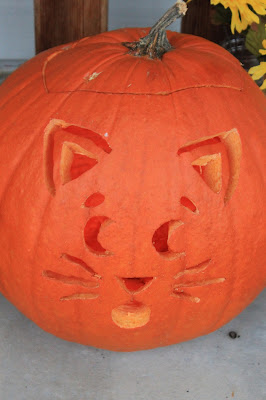 James grandma carved a kitty of course! She loves cats so when I found this pattern I knew it would be puuurrfect (ha ha catch what I did there?) for her. She was so excited. It was very cute when it was all finished. I think it was a hit with all the trick or treating kiddos too! 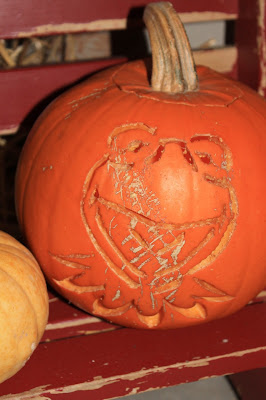 And last of all James grandpa carved Kermit the frog. He did it on a small pumpkin, and when he cut the top to get all the guts out he couldn't even fit his hand in so his lovely wife got all the guts out for him. Awe, how sweet is she. I thought Mr. Kermit the frog turned out to be just darling! He did such a good job carving and he did it quickly too! He was the second one to finish carving.

On Halloween I threw a small party. By small I mean James and I and the grandparents ha ha! We had yummy food, played pumpkin bowling (which the pumpkin turned to who knows what after we were through!) we did some Halloween dancing and of course we watched a Halloween movie. Not a scary one of course.. because James and I do not like those ones. 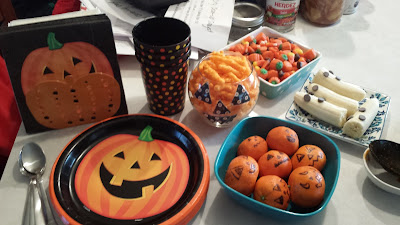 For the food we had pumpkin Cheetos, pumpkin oranges, ghost bananas, mummy hot dogs and some delicious chilly to help keep us warm. To drink we had two orange drinks, one was mango soda and the other peach mango juice. Both were very delightful! 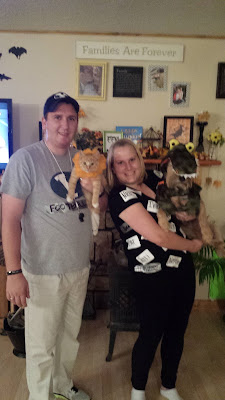 Of course The Mr and I dressed up.. last minute! He was Coach Bronco Mendenhall from BYU. Of course it was the perfect costume for James since he loves BYU so much! I was identity theft and had the whole families names all over my shirt. And of course I dressed up my animals, I'm a good mommy to them! Mr. Ollie Popsicle was a lion and Miss Maggie was the cutest alligator I ever did see. My animals are pretty good sports, but hey they did get some treats out of it! Ollie of course was pretty mad at me but he eventually got over it. Maggie on the other hand, well she's a very patient dog and lets me dress her up. What a good girl she is.

And well there you have it! Our little Halloween we had. It was so much fun and I can't wait until next year. James and I are planning on being more prepared for next year.. in fact we already have our costumes picked out! But you will have to wait and see.
No comments:
Email ThisBlogThis!Share to TwitterShare to FacebookShare to Pinterest
Newer Posts Older Posts Home
Subscribe to: Posts (Atom)