James' family and us went on a trip to Nauvoo, IL to see the grandparents!! (It was a blast.. but you'll figure that out with my next couple blog posts!) We flew out on Saturday and got into Chicago super late, thankfully we had a hotel set up that was actually pretty nice. (For the most part..) So on Sunday the parents decided it would be fun to spend the day in Chicago because we hadn't ever really been there! I'm so glad that this decision was made. Also, it was a total bonus that we had two awesome tour guides to show us around! (Thanks Penrose family!!) 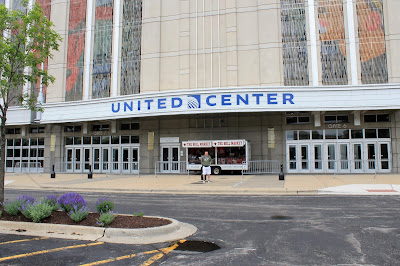 Our first stop after we checked out of the hotel was to the United Center where The Chicago Bulls & The Blackhawks play. This was a great stop because the men in the family were thrilled to see it and I'm sure a few women were.. (I was just along for the ride.. I had no idea what this even was until we got there ha ha!) But it was a good stop because the hubs enjoyed it. So of course I got a picture of him in front of the building. 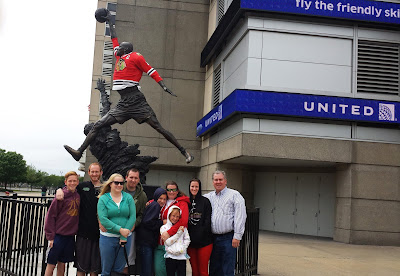 I didn't know this but I'm sure many people do or don't (?) but they have a Micheal Jordan statue out front. It was pretty neat to see that! The picture up above is the whole clan that went on this wonderful trip! Aren't we just so darling? 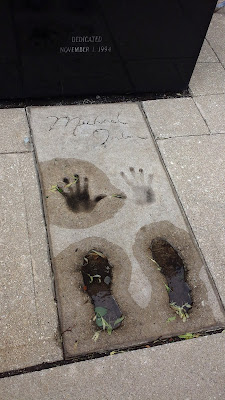 They also have the hand prints AND footprints and also Micheal Jordan's signature. Pretty nifty. That might of been the best part of seeing the United Center. At least in my opinion. 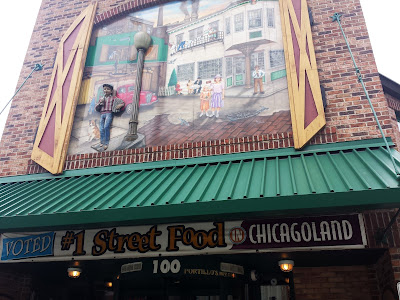 Afterwards we were all pretty hungry and we decided on getting some real Chicago food.. which means yes, we got delicious Chicago hot dogs!! I'm not the biggest hot dog fan in the world.. but if they are certain ones count me in. HA! We went to this really cool place called Portillo's. The outside as you can see is amazing but the inside is even better. (I should of taken pictures..) The inside was like a busy old school street type place and it had celebrity pictures all over the walls of those who had ate there. It was such a scrumptious place to dine at. 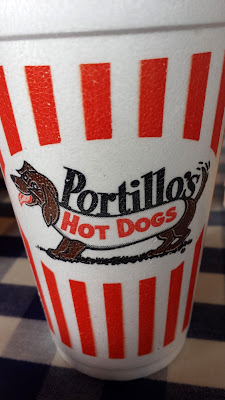 I had to take a picture of the cup.. I thought it was just too cute to not share. And also it helped me to be able to remember the name. (I was born blonde for a reason.. my memory ain't so well..) 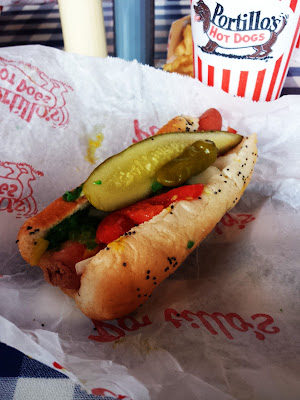 And last, this is the hot dog that I enjoyed. It is the original Chicago dog. What's that you might ask? A hot dog on a poppy seed bun topped with relish, peppers, onions and of course a pickle. It was one of the best hot dogs I have ever have! In fact I'm kind of craving one right now. Just kidding.. kind of. 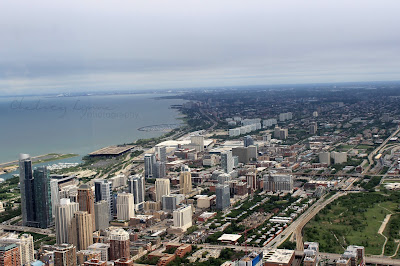 Our final stop before we headed off to Nauvoo (which was a 4 hour drive) was to go to the Sears aka the Willis tower. It was very tall of course. The views were amazing. It was awesome to be able to see everything from so high up. And seeing all that water made it that much more beautiful. I took a billion pictures of all the views but I decided that I would only share one. Yes, I spared you some boredom. 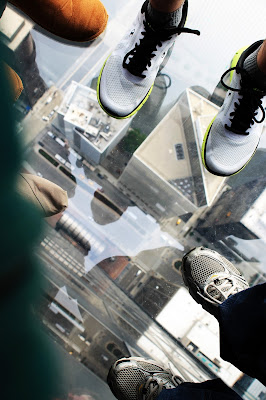 So at the Sears Tower (Willis Tower) they have these sky decks. Which I was at first determined not to go on.. but as you can tell from the picture I did indeed go on the sky deck. It was nuts to look down and see the roads and buildings beneath you. It did scare me a lot so after I took this picture I was quick to get the heck outta there!! But I did pat myself on the back for at least doing it. And a BIG shout out to Halee who also did it!! (She's afraid of heights but still did it!)

And there you have it, the first part of our trip. It was a lot of fun and a great way to start everything off! And I really hope that one day I can return again to Chicago and explore a little more.. although I don't want to drive there maybe I'll be rich and can hire a driver. Ha ha! 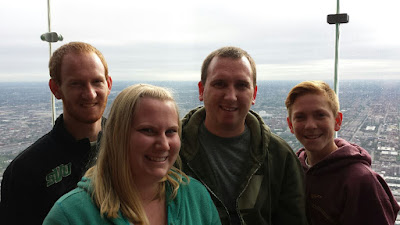 PS. I got this picture also as proof that I really went in the box.. as you can probably tell from my face.. I wasn't that excited about it ha ha!
Email ThisBlogThis!Share to TwitterShare to FacebookShare to Pinterest
Newer Post Older Post Home