Let's talk, shall we?

My house is finally almost all unpacked! The only thing left is our room.. and to be honest I am just WAY to lazy to finish unpacking/decorating ha ha. But hey at least I got the part that people will actually see pretty much all cleaned and done so I don't have to feel so ashamed. But my gosh has this last week and this week so far just been busy! I swear I can't catch a break, although sometimes I do sneak in a few ha ha. Well, lets talk about what's been going on lately and I warn you non of this will be in order ha. Sorry. 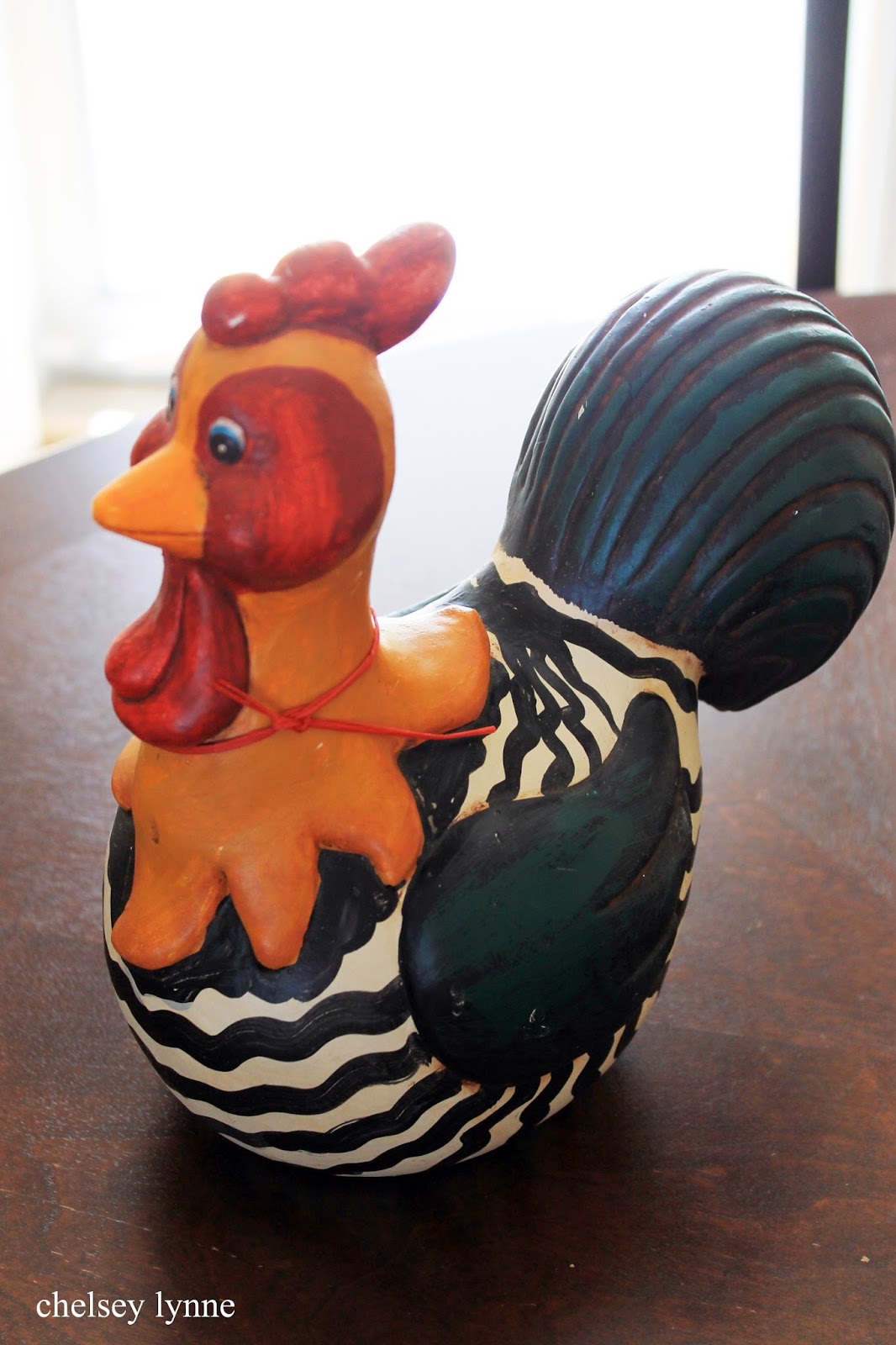 Once I found out that we were for sure going to be moving to Idaho to house sit I decided that I really wanted some sort of a cute chicken or a rooster. Well, the Saturday before we moved up I went to some yard sales with my mom and I found this little gem! I was so thrilled. It was brand new and ONLY A DOLLAR! What a steal. It now sits comfortably in my kitchen next to my fruit basket. I think it looks so darn cute and it really is me.. especially with the bright colors and such. I love it. 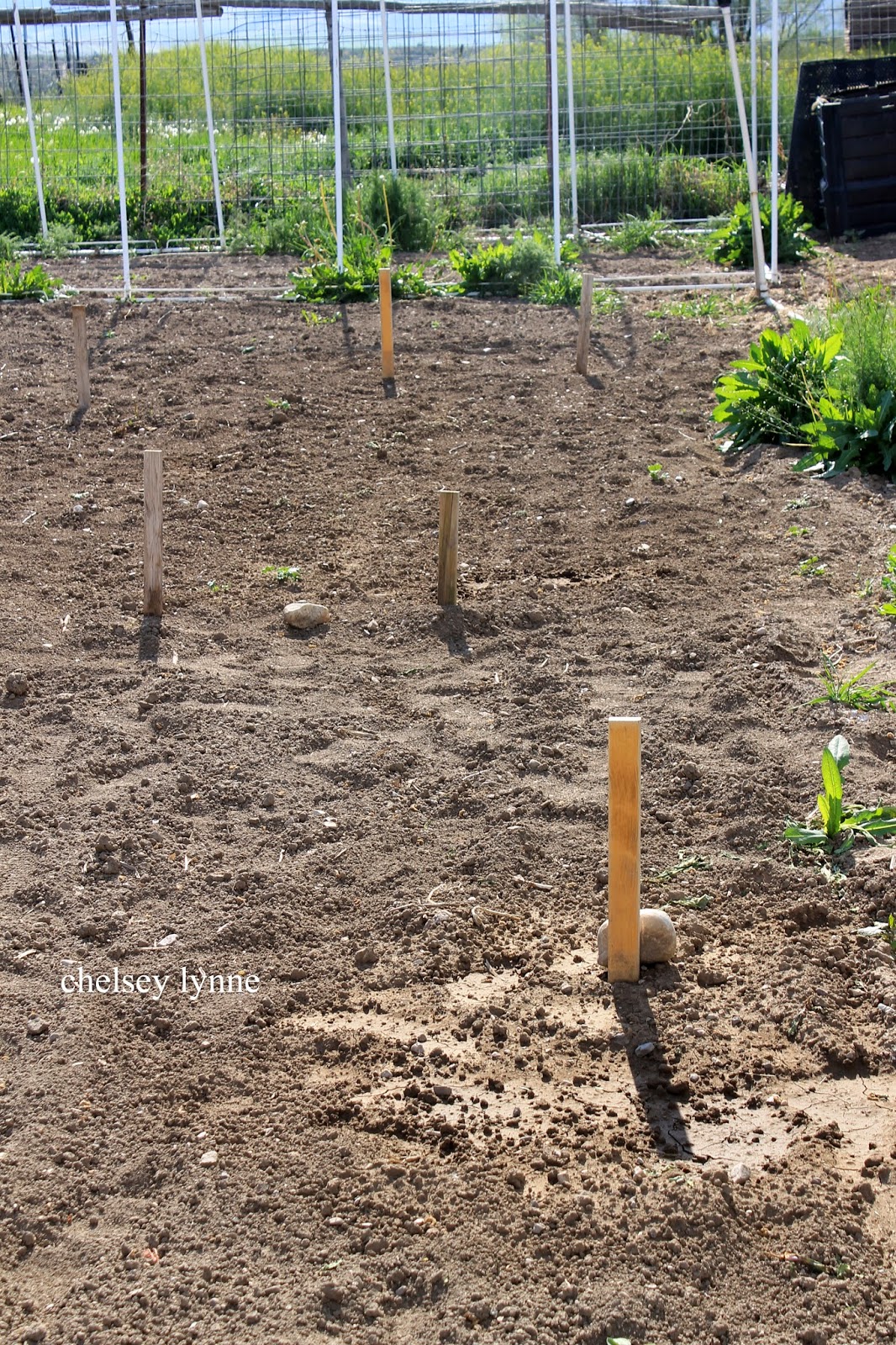 We were able to put in a garden in our garden spot last week. It doesn't look to fancy right now but I'm hoping sometime soon things will start to come in. We put wood steaks in to mark the spots and wrote on rocks so we would know what is what so it looks a little odd as of right now due to nothing sprouting yet ha ha. We planted corn, carrots, lettuce, peas, watermelon, pumpkins, squash and cucumbers. Rhubarb, strawberries and raspberries were already planted and they are coming along nicely. Since this is our first garden we have our fingers crossed that everything will grow this year. But hey if it doesn't, at least we tired right? And we can learn from our mistakes and try again next year. 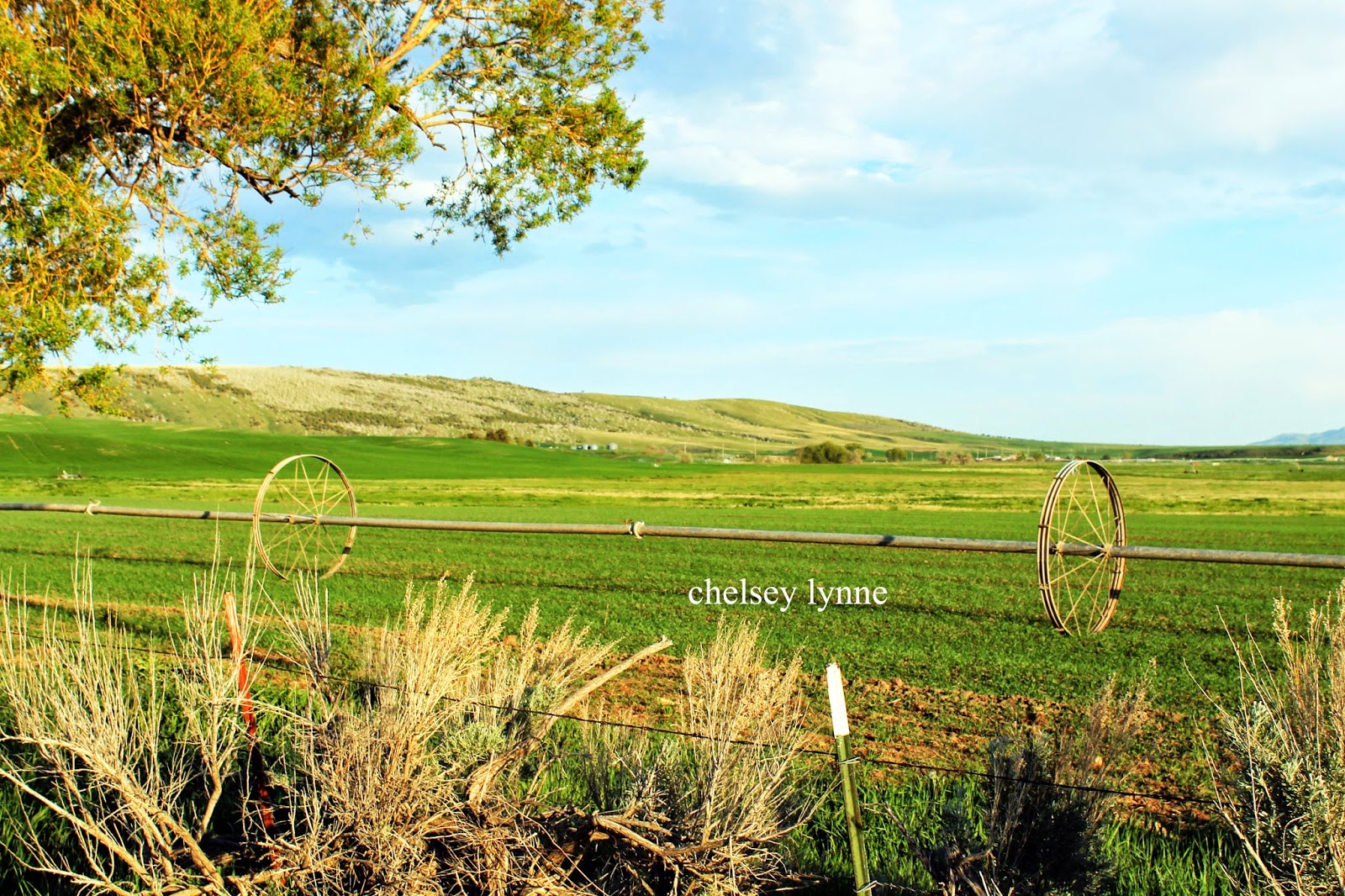 We went for a drive up the "canyon" I use that word lightly ha ha. It's not really a canyon but I don't know what else to call it really. Anywho. I was able to snap A LOT of great pictures for my photography blog and Facebook page and a few of them for National Geographic. It was simply beautiful. And I need to give my husband credit for being such a great sport and suggesting the idea. He even helped me pick out a few spots that look great! He's very supportive that way. Which is a great blessing in my life. 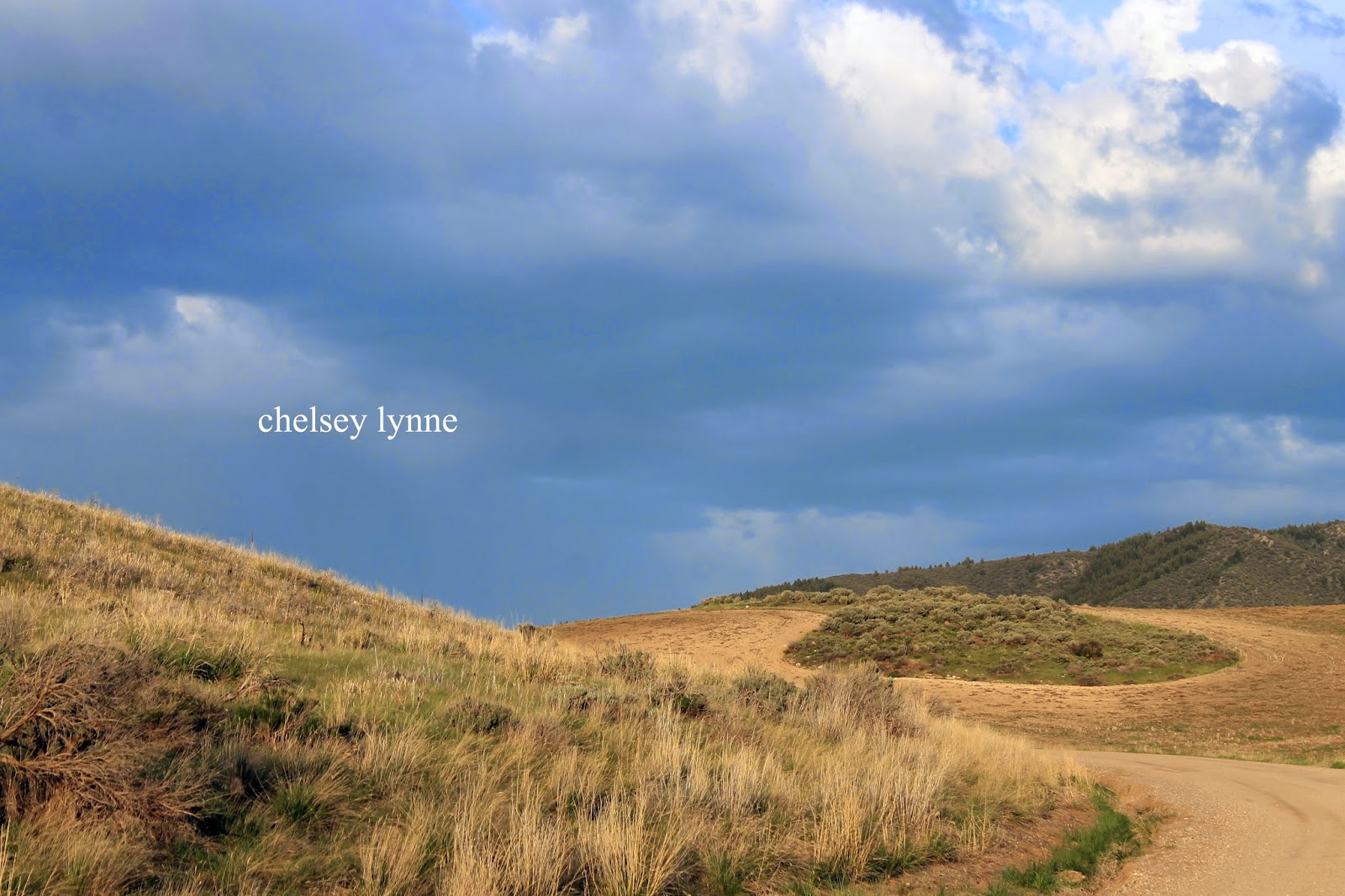 This is what I mean when I say "canyon" ha ha. What would you call it? A dirt road? A nice drive to the middle of nowhere? See.. I thought canyon sounded best. You can view my photography blog here, my Facebook page here and my national geographic page here if you'd like. 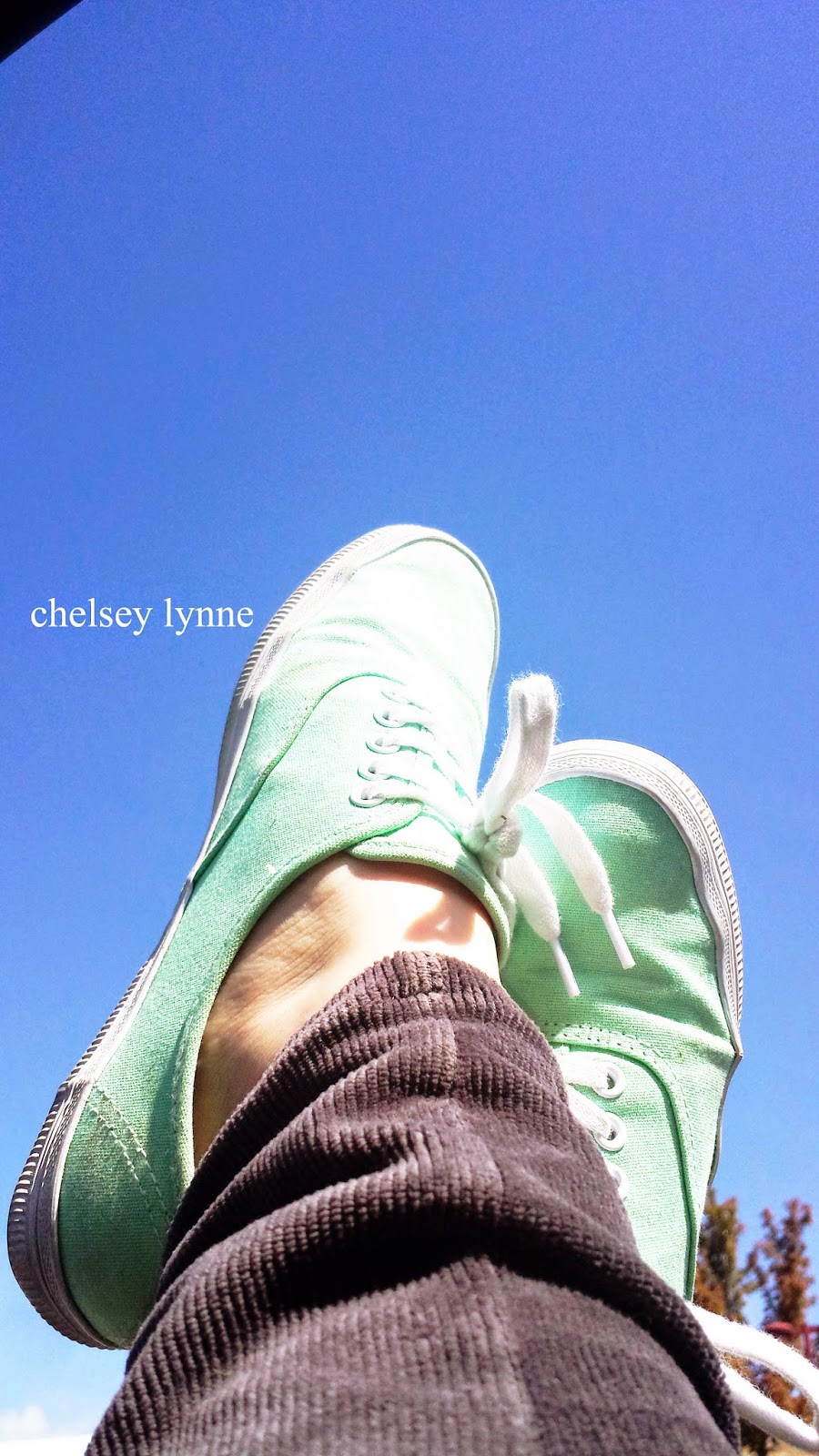 Last week James (my husband, the Mr.) had to go into Pocatello to fill out some paper work for his new job. He/we both figured it would take about 15 minutes to fill out. So I tagged along so I could go grocery shopping that way we only had to make one trip and I didn't have to leave him helpless in the grocery store. Behind story.. it was hot (finally) and I had to wear pants because I got fat so non of my shorts from last summer fit. BUMMER I must say. Why? Well the 15 minutes wasn't 15 minutes at all. It was 2 hours! I sat in the car in the hot car might I add for two hours. Then on top of it he had to go and take a drug test so I sat in the car for another 30 minutes. Needless to say I was hot, hungry and bothered in a non sexual way. So I made him take me to lunch ha ha. Which I think worked out for him also because he was starving. And trust me he felt bad. At least he was kind enough to leave me the keys so I could turn the air on and thankfully I had brought along a car charger so I could call some people and talk to them so I was entertained and also play on my phone. Thank goodness for technology now days. 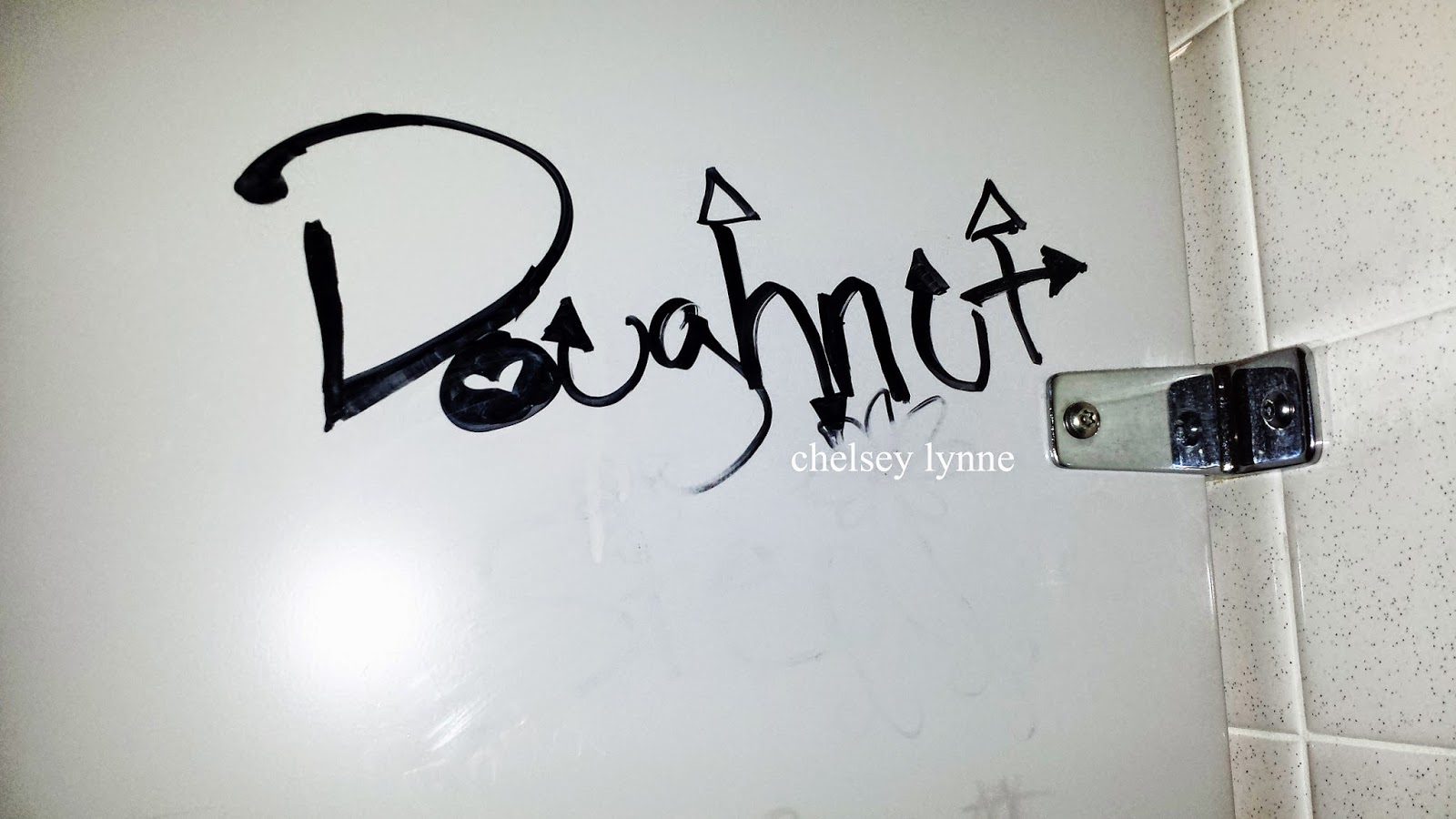 Also while I was waiting I had to pee like a race horse and thankfully his place of employment is close to a store. So I went in and pee'd and was relieved. But while in the toilet I noticed that someone had "tagged" the bathroom stall door with the word doughnut. I thought it was hilarious and of course snapped a picture then sent it to all my friends. I say that like a have a ton no only three which is all I need ha ha. It sure did brighten the mood though. Made me a bit more bubbly. Good thing I had to pee eh? 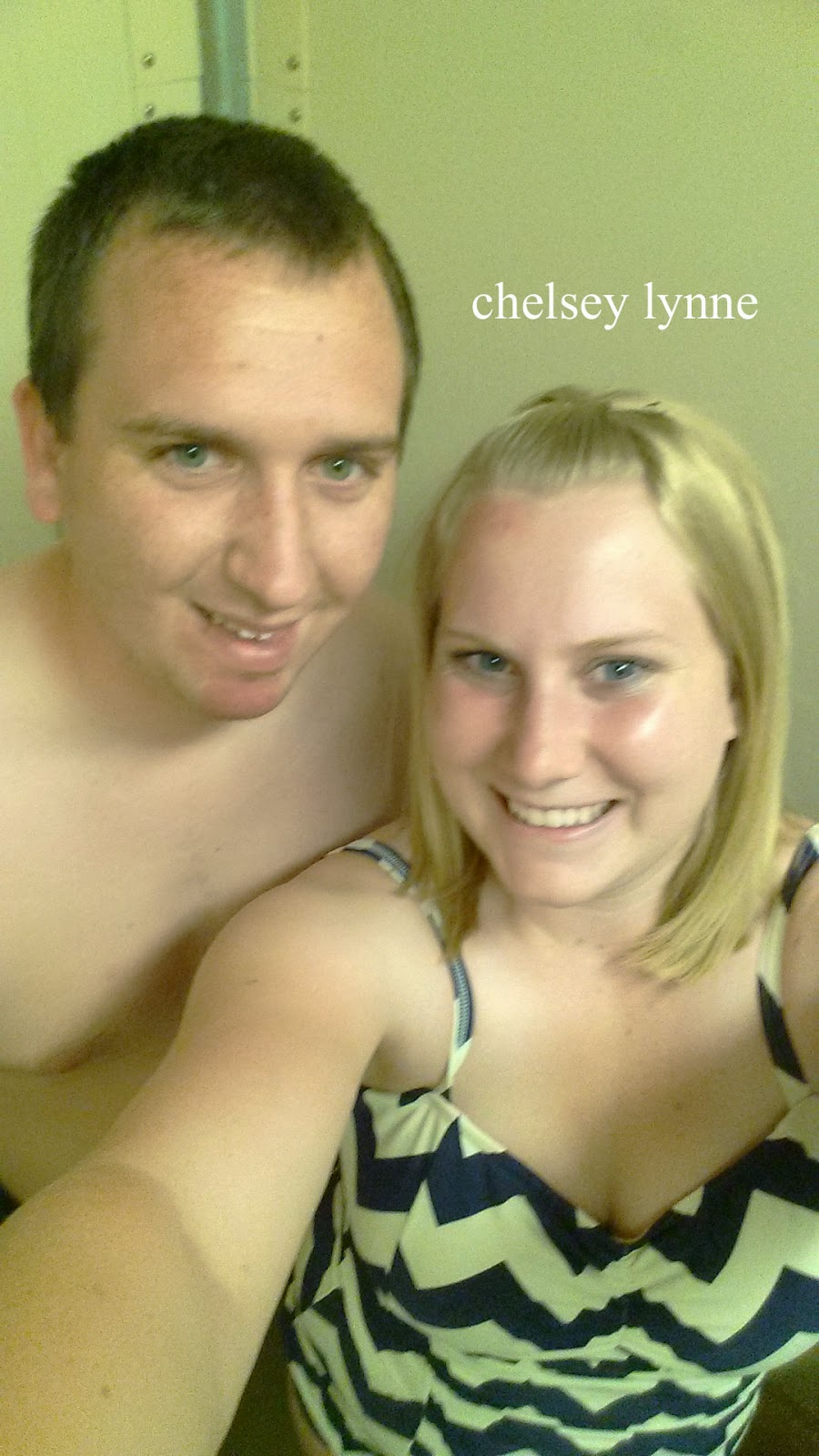 On Friday we decided we needed to go on a date. Due to the long week of unpacking, moving and blah, blah. We were still stressed and tired. So what better place to go than to the hot baths! It felt SO nice. Best idea ever. If you have no idea what I am talking about let me explain. They are in Lava Hot Springs, Idaho. They are basically hot tubs but with naturally hot water and it is fantastic. They each have different temperatures so you can pick and choose. I personally never go to the extremely hot one, I think it is just way too hot for my taste. Not relaxing ha ha. But who knows maybe you'd like it. 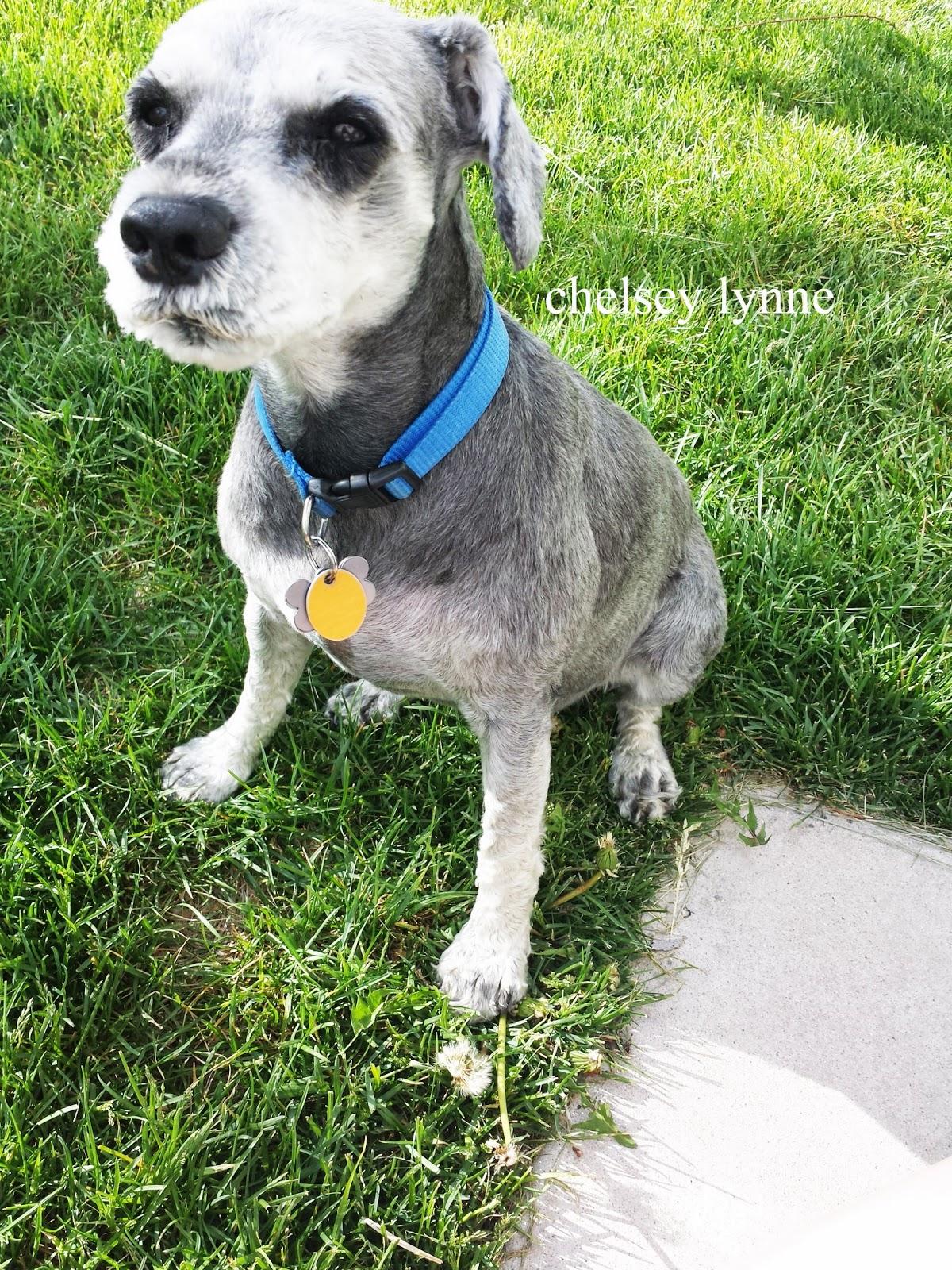 Mr. Max Spud got himself a new do! He did not want to go there one bit! We walked up to the place and he was pulling on his leash trying to stay as far away from the door as he could but we got him in there. When we went back to pick him up we could hear him waiting by the door. He was thrilled to see us and was so ready to leave. As soon as we put his leash on he was ready to dart out the door. It was hilarious.

Well that was my week... last week at least ha! It was very fun and I am so excited to be living in Idaho. I can't wait to see what other adventures we have in store for us. I am so blessed to have this opportunity! I am grateful for my husbands grandparents and them allowing us to live in their home and make it our own at least for 18 months while they are serving their mission. They are some of the most amazing people that I know. I'm glad that they are a part of my life and that I am apart of their lives. I'm one lucky gal.
Email ThisBlogThis!Share to TwitterShare to FacebookShare to Pinterest

Well, yeah.. it has been AWHILE since I last blogged. You might or might not be wondering why. Either way, I'm here to explain ha ha. I have been super busy lately due to moving out of state. If you didn't know, I lived in Utah. I have lived in Utah my entire life. Well, up until now ha ha. I didn't move super far but it's far enough. I am now located in Idaho! This will be an adventure but I'm excited about it. Anywho, let me take you on a quick tour of my new home! 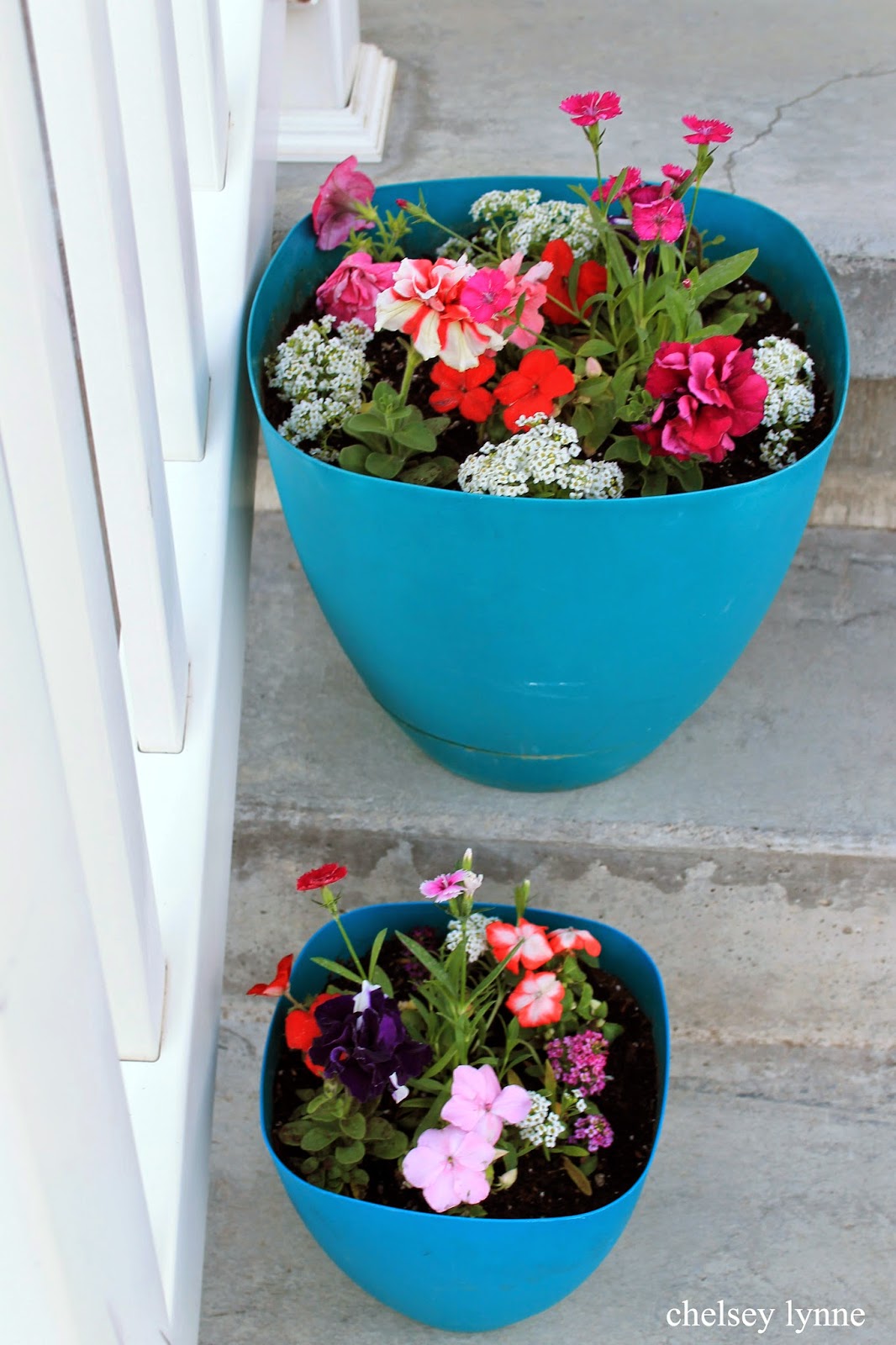 These are my cute little blue flower pots that sit on my new porch! This was my first time ever making/planting pots. It was a lot of fun and I am actually very proud of myself if I do say so myself. I even scored a great deal on them. It was splendid. I am very excited to see what they look like after they have bloomed even more. I also was able to plant some flowers in my new flower bed. Sorry didn't take a picture.. but I will once they are all bloomed and pretty. 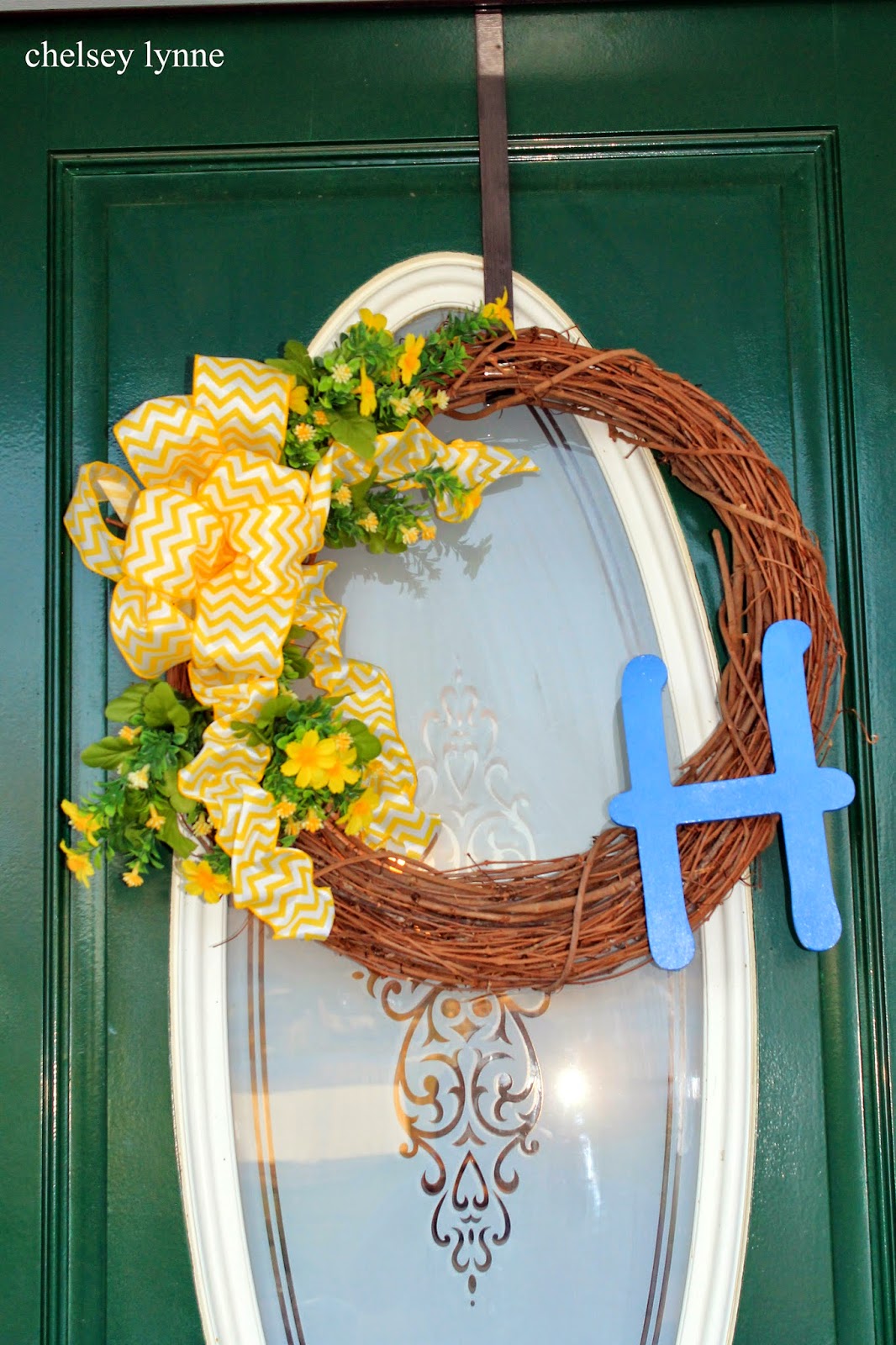 Here's my fun little "summery" wreath I made. It was VERY simple to make and I absolutely love it. It was also very cheap. It only cost me about $10 or less to make. Not bad at all if I do say so myself. Once again, I am having a proud moment. ha ha. 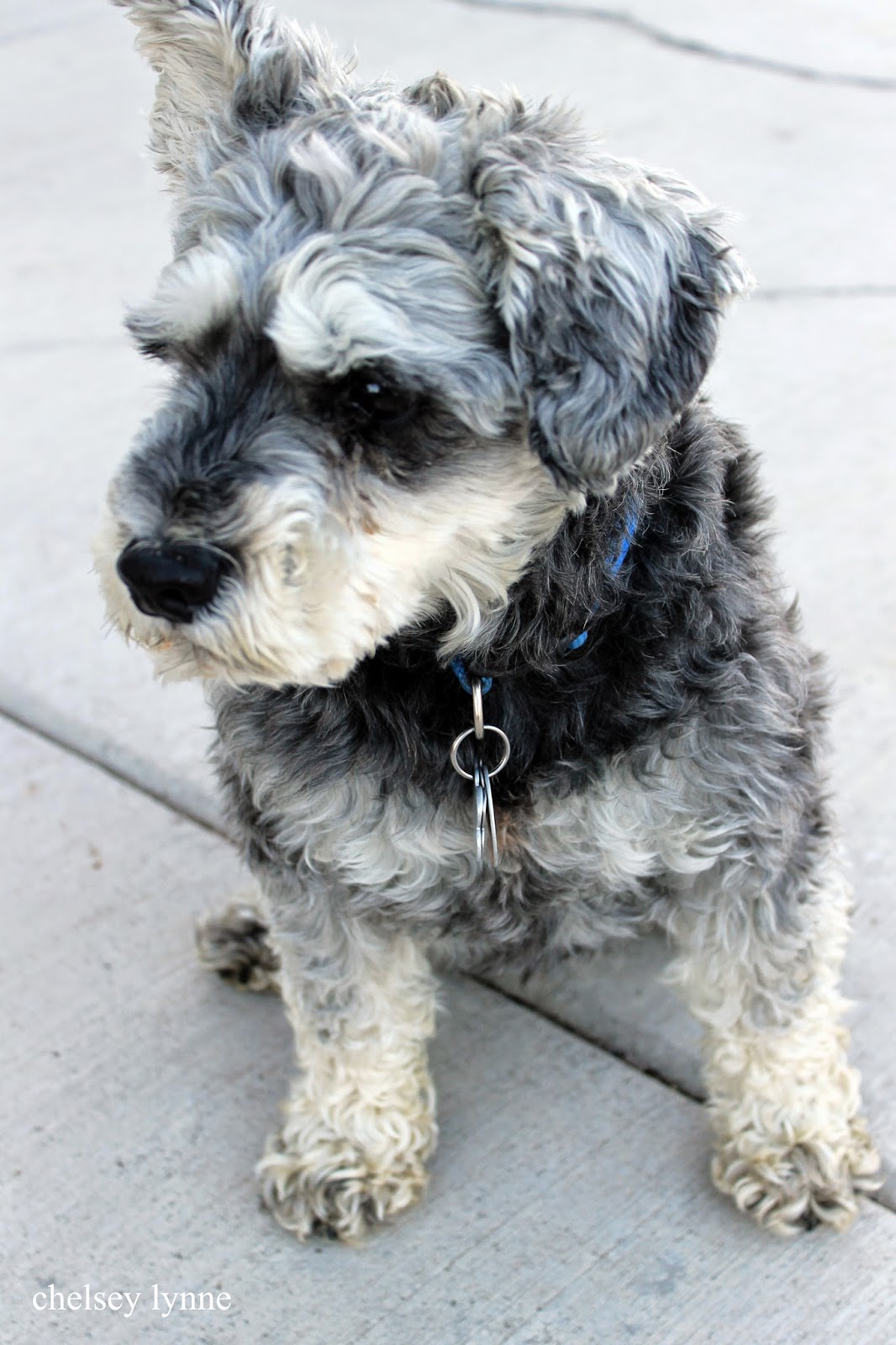 Meet Max, my new doggie. He's adorable and has a great personality. He's so much fun and I have waited a long time to have another pup since my dog Toby died. Max is very loving and just a silly dog all around. 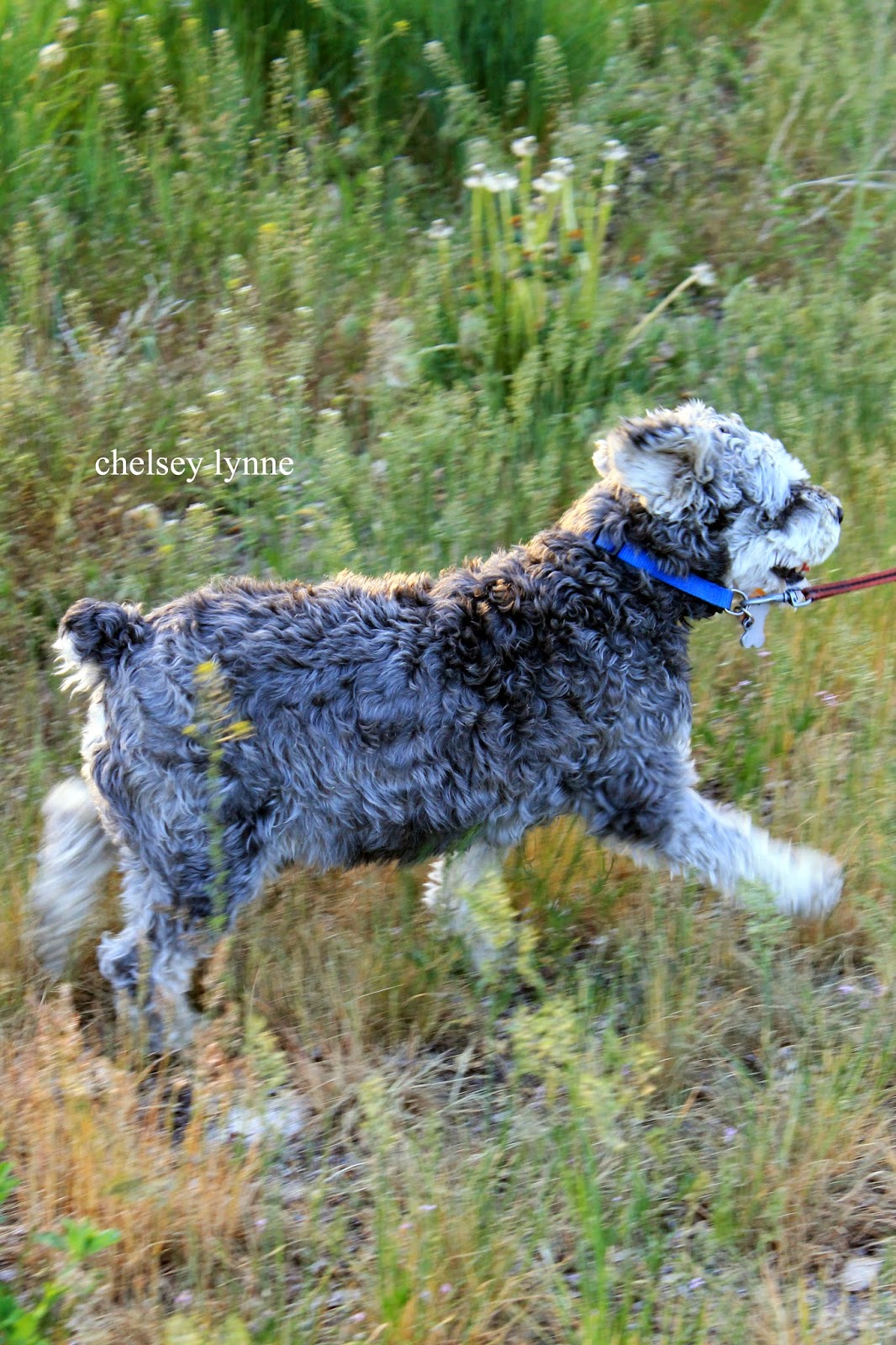 Max LOVES walks. As you can tell.. he's a very happy dog while on a walk ha ha. He especially loves tall grass... you know the grass that is incredibly tall that hides him. I guess it makes it good to pee on? Not sure but he prefers it. Needless to say he is such an outside dog which is fine by me. But I think he keeps it even on being outside and being inside which is nice. 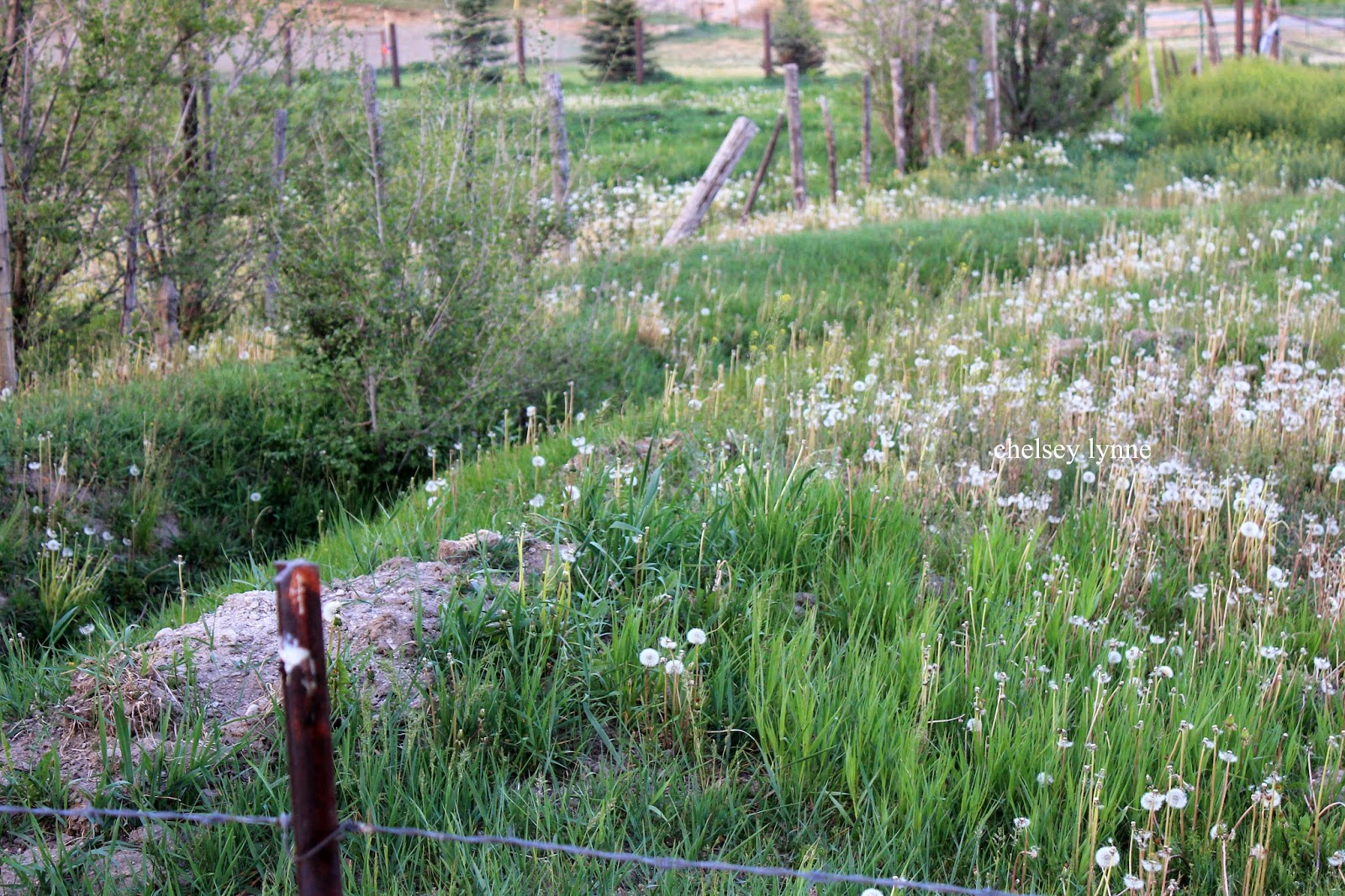 This is my lovely view. I never really thought weeds were pretty until I traveled to Idaho. It is absolutely gorgeous here. Not to mention it is very peaceful here. I have to say I really enjoy living in small towns. Who knows I might really become a true farm girl. I am living on one after all ha ha. So why the heck not?! 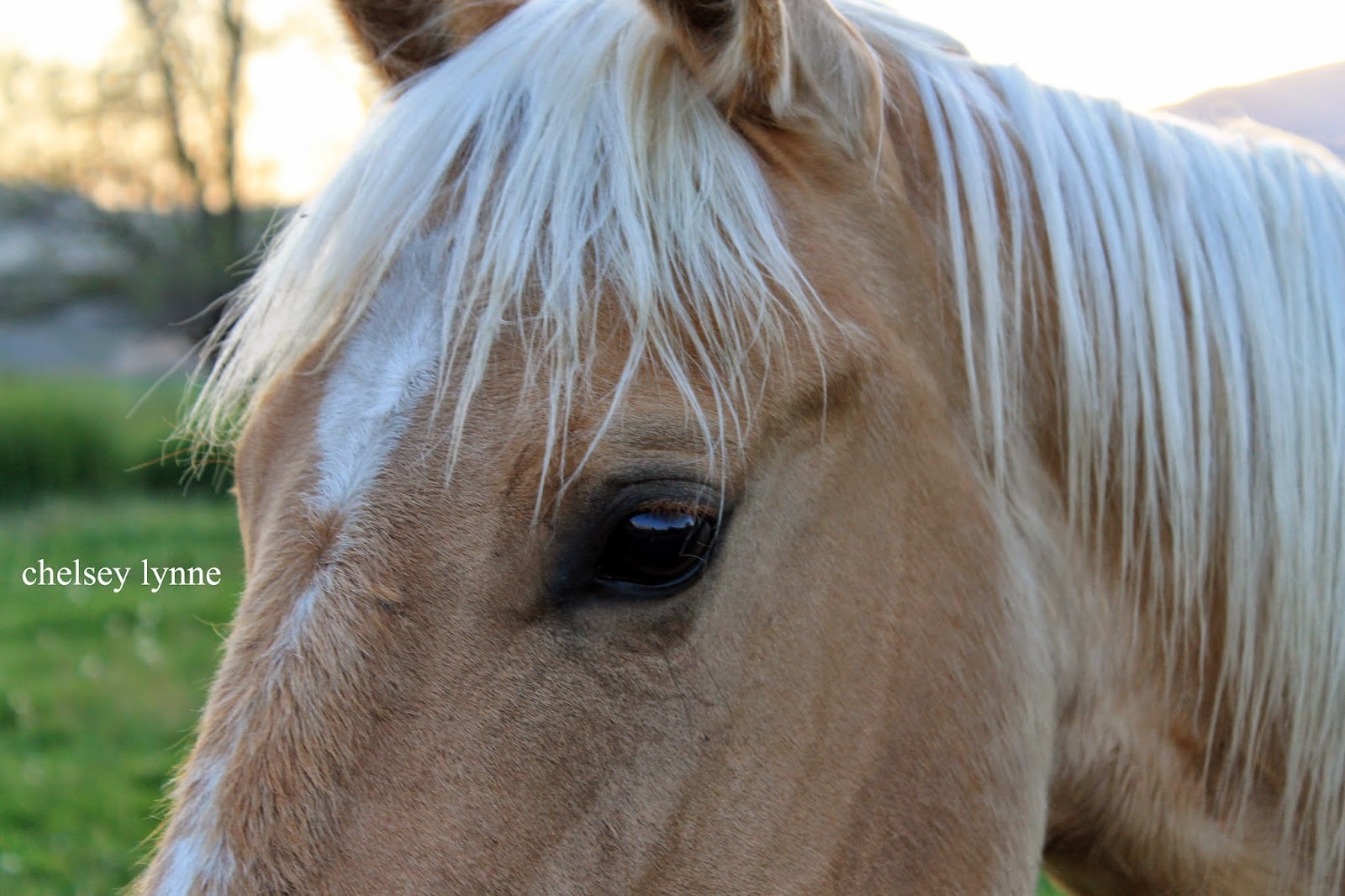 This is also something I get to see everyday. Beautiful horses. They are everywhere! In my own backyard.. practically ha ha. So hope ya'll are okay with pertner a lot of pictures of farms, fields and farm animals (mostly horses.) Because well, this is my home and I love it!